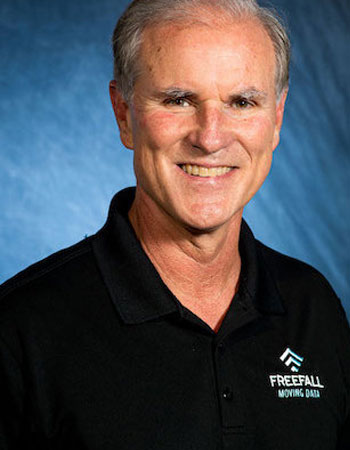 Doug Stetson is President and CEO of FreeFall Aerospace, a small business dedicated to advancing and developing innovative antenna technology for satellite communications and 5G internet applications. Prior to founding FreeFall in 2016, Doug spent nearly 30 years at the NASA Jet Propulsion Laboratory in a variety of technical and management positions including several assignments at NASA Headquarters. At JPL, he had lead roles in systems engineering and mission design for a number of high-profile missions to Mars, Jupiter, and Saturn, and was responsible for the development of new planetary mission concepts and programs. Doug led the development of a number of mission and technology “roadmaps” for the national science community and NASA, and established new initiatives for mission and system innovation and cost assessment. During his three tours at NASA Headquarters, Doug served as the deputy manager of the NASA Advanced Planning and Integration Office, coordinated development of the Agency’s 2003 Strategic Plan, and served as acting chief of Planetary Advanced Studies in the early 1990’s. After leaving JPL in 2008, Doug established the Space Science and Exploration Consulting Group and was project manager for the LightSail mission, a privately-funded Cubesat that successfully deployed and tested a solar sail in Earth orbit. Doug holds a B.S. in Physics and M.S. in Aeronautics and Astronautics from Stanford University. He is the recipient of a number of local and national awards, including the NASA Exceptional Achievement Medal and the JPL Award for Excellence in Leadership.